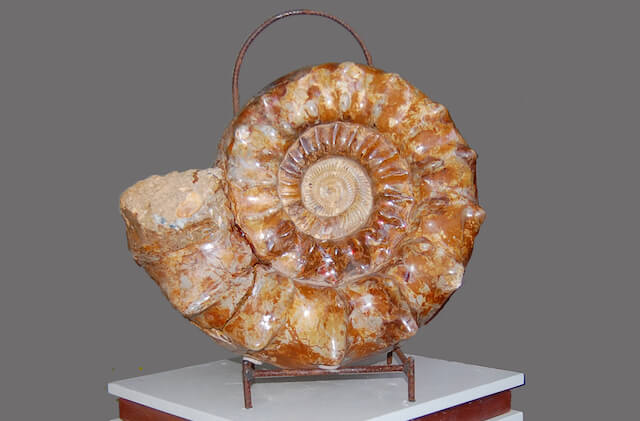 65 Million years ago Ammonites were abundant in the prehistoric oceans. Theories suggest that the Ammonite was named after the Egyptian God Ammon who is depicted with ram horns and resembles the spiral coil of the Ammonite fossil shell. These squid-like invertebrates grew as large as 6 feet in diameter and it was actually the females that would grow up to 400 times larger than males. The history of the Ammonite fossils fascinates me, and the fossils that are found all around the world are one-of-a-kind as no two Ammonites are the same.

How an Ammonite Fossil is formed

Like all fossils, the process takes millions of years and it begins with the death of the Ammonite. It floats to the bottom of the ocean and as the body of the marine creature dissolves or is eaten by other sea creatures, the only thing left is the shell. Sand and silt begins to gradually cover the shell and ultimately protects it from deteriorating. And after thousands of years, the sand and dissolved minerals turn to rock. The ocean eventually recedes and the shell ends up on dry land. On land, the minerals form crystals inside the shell and erosion of the sand finally unveil the Ammonite Fossil. 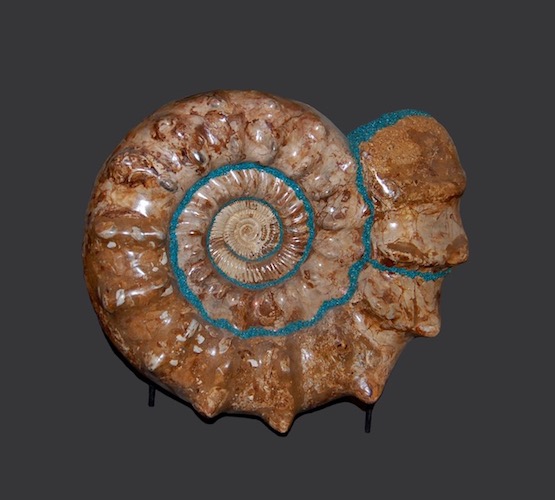 Where I find Ammonite Fossils

I’m so Grateful to be able to travel to Morocco, where I purchase beautiful Ammonites in Erfoud, a small village in the Sahara Desert. In Moroccan villages, the culture is still very much the old way of life. There in the Sahara desert, they dig up the ammonites and ortho Sarris fossils, and they do all of the cleanings in preparation for it to come to the United States or other parts of the world. The beauty of seeing the golden, orange sand dunes are a site that everyone should see at least once in their lifetime.

When I arrived they welcomed me in and showed me how they actually dug at the sites. All I saw was a small hole that had a ladder going down many, many feet. In fact, I dropped a stone in an old hole and I didn’t hear the stone land…OMG, it was a really deep hole. Berber Arabs have been digging for fossils for many, many generations and I was privileged to see them in action. They explained to me that those specific fossils were in the ground at sea level, and then there was a shift of the planet were the sea dried up and all of that area turned to desert. So when they are digging they are finding layers and layers of these ammonites. 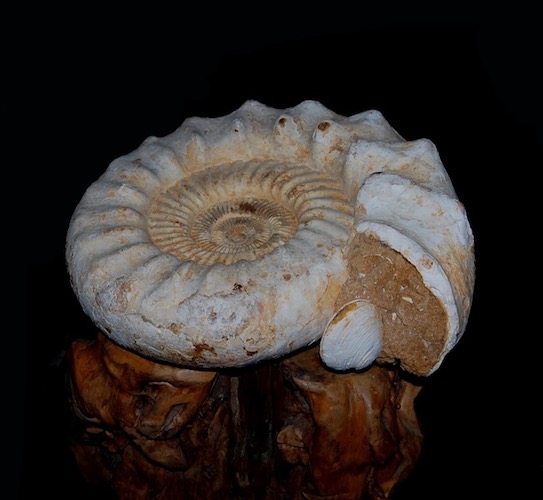 In the Medieval era the Ammonite was thought of to be a petrified coiled snake and was used for its medicinal properties while in places like Nepal, the Hindus believe it’s a manifestation of G-d in a concrete form. There’s just so many interesting ideas and stories about Ammonite Fossils. Many people, including me, see the Ammonite spirals as being infinite energy. Infinite energy is so important in business, and I suggest using Ammonites as a decor element, either mounted on the wall or smaller ones may be used as a paperweight. Ammonites in business bring in abundance and infinite wealth… yahoo. I personally have a natural ammonite in the entryway of my business, and I have opalized ammonites as paperweights. So I don’t just suggest it, I practice it.

When purchasing a piece of history, like minerals and fossils, it’s important to learn about where they came from and how it can help you in your life. Michal And Company are here to help you discover Natures Art Decor and the abundance that goes along with it.

DIY: Paleontologists use Ammonite Fossils to help date other fossils found in the same area.

Michal’s worldly background made her the perfect ambassador for nature’s gems. She was born in Israel to parents of Iraqi, Yemenite, and European origins moved to America at a young age and grew up in Lexington, Massachusetts. As a pre-teenager, she mastered sales in her mom’s retail store, and by the age of 19, Michal opened “Jewels of the Nile,” a traveling business selling beads, statues, antiques, and crystals.

Through decades of traveling the world to handpick and sell gems, Michal became a leading expert on rocks and minerals. Transforming any environment with Nature’s Art Decor™ is her specialty. Michal believes that each crystal has a specific purpose and place in life, business, and the home. Tranquility and abundance can be achieved through the right placement of Nature’s Art.

From international businessmen and women to Beverly Hills celebrities, and everyone in between, Michal uses her expertise to place the exact crystals needed, giving clients the alignment they desire in both home and work environments. She has developed her own technique and system of Energy Positioning Placement™ and teaches audiences about stones and energy all over the world.

How Often Should You Cleanse and Charge Crystals?

Most crystals travel long distances and may change hands many times before they reach their permanent owner. Throughout their journey to you, the stone may absorb a lot of energy, and in order to restore it to its natural state,…

Crystal shapes possess different powers for what you desire. So, you need to focus on where you are in your life and then how to use specific shapes to guide the point you’re at now to where you want to…

The magical properties of crystals are endless and may be harnessed to enhance and create the life that you desire. One of the popular uses for crystal energy is protection. There are many different types of crystals for protection, and…

The Dos and Don’ts of Getting Started with Geodes & Crystals

For thousands of years, humans have turned to geodes and crystals for physical and emotional healing and rehabilitated the body's aura. They are Mother Earth's gift to humankind and transfer the extraordinary power of the sun, moon, seas, soil, and…

The Ultimate Guide to Using Crystals in Yoga and Meditation

For millions of years, human beings have harnessed the power of Mother Nature by incorporating crystals into their everyday lives. Often, crystals are displayed in homes, incorporated into ceremonies, and used in jewelry. However, two of the easiest ways to…

Why Quartz is a Must-Have Stone This Year

When I first moved to a home in Woodland Hills, I was working day and night, night and day. I felt like I never had a break. When I moved, I cleaned my crystals and then told each one…